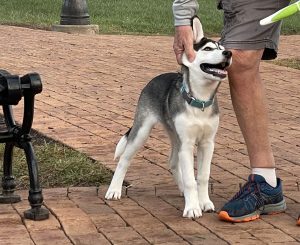 “Laika is my first dog out of college, rescued from Clermont County. She was born into a drug-addicted family along with her brothers and sisters that were seized by the county. All of the offender’s animals were posted on Petfinder and luckily found homes within a week. Laika is named after the first dog to be launched into space by Russian cosmonauts on October 4th, 1957. Just like the original Leika, ours is a husky german shepherd mix.

In spite of her rough beginnings, Leika is a cheerful puppy that is cautiously playful around unfamiliar dogs. It took a while to get her weight back on track, and we have been feeding her NatrixOne Puppy to make sure her Omega 3 and 6 levels are the right balance for a husky whose natural diet is heavy in fish oil.” – Chris
– Sarah R. 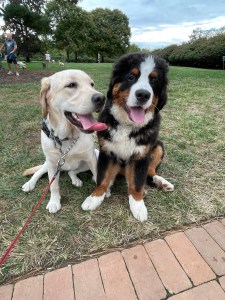 “We recently adopted our first Bernese Mountain Dog from Minnesota named Gus. Gus is a very curious puppy that can easily spend the afternoon watching the clouds go by between naps. We started taking him to the dog park to get more exercise with puppy friends and were introduced to NatrixOne. Sure enough, Gus took to inhaling the supplement at mealtime and is starting to chase the ball and other dogs with more GUS-to. Thanks for the great product NatrixOne!” – Dan 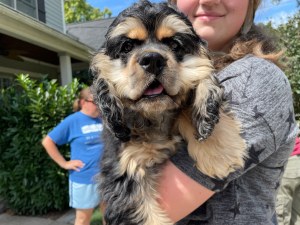 “Our black and tan buff cocker spaniel puppy, Ranger, was rescued from an illegal puppy mill in Dayton, OH. Ranger was very shy around our other dogs and family, having not been properly fed or sheltered in his early days. Slowly he has come around to enjoy mealtime, including the NatrixOne Puppy we were invited to try. Instead of shying away from his food, he looks forward to being first in line at the Riddle dog trough, and Natrix has made his coat extra soft and shiny. Our other dogs wait around for any morsels Ranger might have missed. Thanks for the great product!” 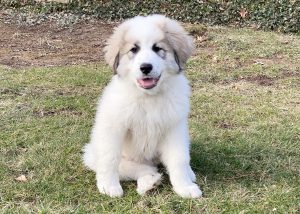 As it was truly wonderful to see how much NatrixOne™ benefited our first Great Pyrenees, Camelina Pearl – especially improving her quality of life in her later years (she had two difficult knee surgeries early on and struggled to get up as she got older). NatrixOne™ gave her an extra 3 years of pain-free playing and we are so thankful for that. When we got a new Pyr puppy, Camille, we were excited to add the new NatrixOne Puppy product to her diet to see what the additional DHA and BetaCarotene could do for her. 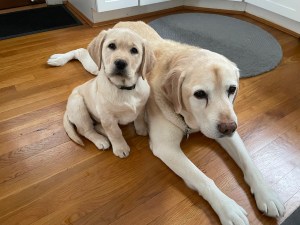 Birdie is our 8 month-old English Labrador from Troy, Michigan. Like most lab puppies, she will eat anything. We take Birdie on daily walks with her dog friends, and wanted to make sure her immune system was strong enough to protect her from harmful food and illness. NatrixOne Puppy has given her an extra boost of vitamins to nutrients to encourage healthy eating habits. As a result, she seems happier to have more plant-based foods in her diet, which is better on our budget and the planet. 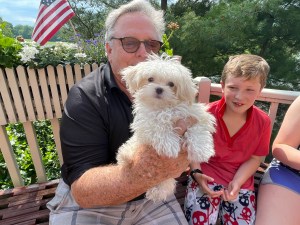 Our new Maltese-shitzu puppy Zoey has a hard time keeping on weight. She is a picky grazer that won’t sit through a meal. We have tried wet food, raw meat, and ultimately started using NatrixOne to make sure Zoey was getting enough vitamins. Her diet is now more consistent and she loves the flavor! 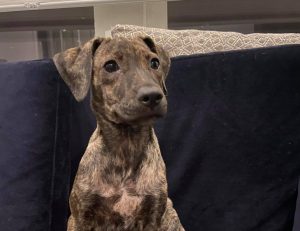 We chose a puppy food that was high in fat, adding NatrixOne Puppy for even more vitamins and nutrients to bring Indie back to a healthy weight. She is still shy around humans and is already best friends with our other dog Nahni. NatrixOne is a great product for rescue dogs looking to make a full recovery from previous malnourishment or injury. 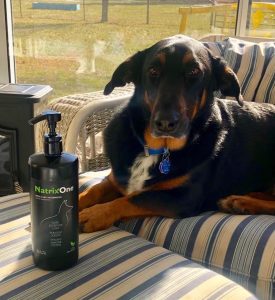 Indie was a stray my husband picked up in the middle of nowhere in Indiana. He was probably a little over 1-year-old according to our 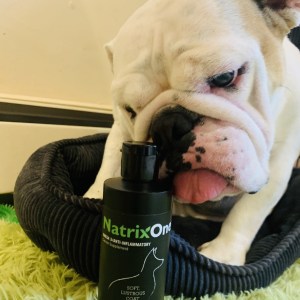 “We have two English Bulldogs and one French Bulldog who are constantly dealing with seasonal allergy flare ups and itchy skin and coat. I have 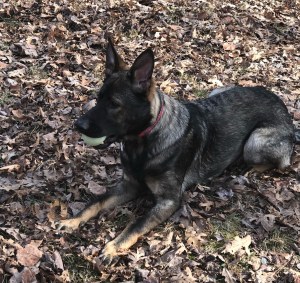 “Our pup, Tirpitz, is a 9 month old German Shepherd. He has been on NatrixOne now for about 2 months and the results are amazing 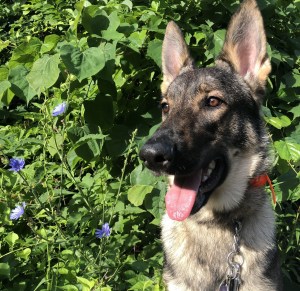 “Peralta is my 1 year old German Shepherd. Peralta and I are avid hikers and have hiked all over Western Ohio. When we started I 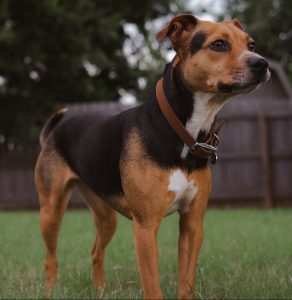 “Our dog, Stella, is a 4-year-old 50 pound American Terrier Mix. Right before her 2nd birthday she tore her ACL. After the ACL repair surgery 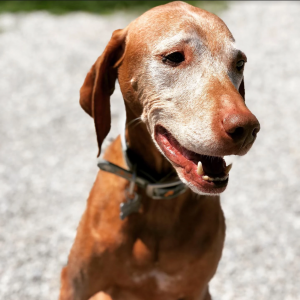 “Hank is a 10-year-old Hungarian Viszla. Since topping his food with NatrixOne 6 months ago, he’s keeping on weight better and actually finishing his meals. 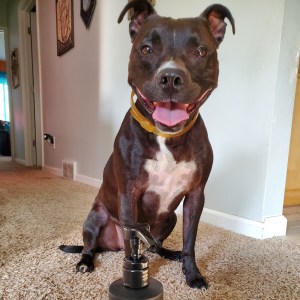 “Remi is my 4-year old Pitbull baby. She has high energy and loves playing fetch with her favorite ball and running up and down our 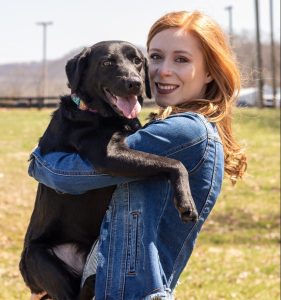 “Luna is a 3-year-old Labrador mix and has suffered from allergies and chronic ear infections almost her whole life. Since we started the NatrixOne supplement 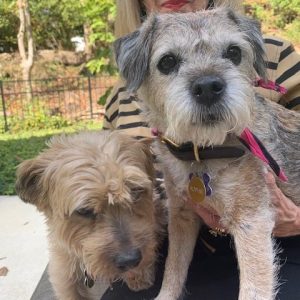 “Sophie is an 11-year-old Border Terrier and Stanley is her 7-year-old Shitzu Terrier mix brother. Our dear friend introduced us to NatrixOne about a year 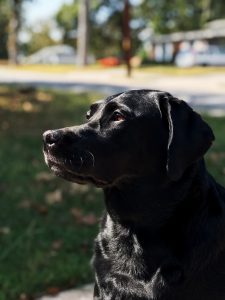 “Bob has had some serious heart and thyroid issues as well as the blunders that come with aging, achy joints. Bob just couldn’t get around 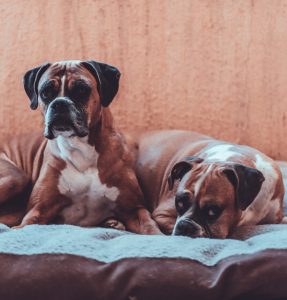 “Thankfully, my boxer sister pups were introduced to NatrixOne last summer. My older female boxer had been slowing down, was having loose stool issues and 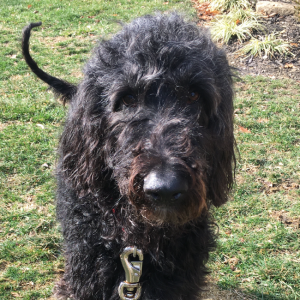 “Malcom is a 7-year-old Labrador mix. We had been struggling with skin issues (mainly itchiness, rashes and hotspots) until a friend recommended NatrixOne. We have 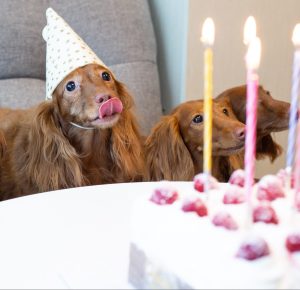 “Both Cinnamon and Honey participated in the NatrixOne 100-Dog Trial at Four Paws Animal Hospital. Once the trial ended I continued giving them NatrixOne. I 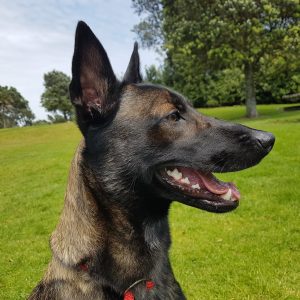 “Tango is a 105 pound, nearly 11-year-old retired law enforcement K9. Since starting him on Natrix One about one month ago, he appears to be

Please fill out the information below to leave a testimonial for NatrixOne. As a thank you, you will receive a NatrixOne surprise in the mail!